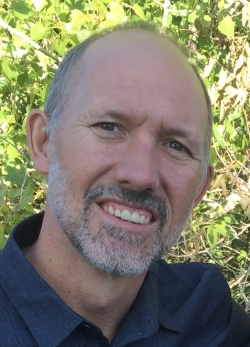 Ronnie Lewellen Snyder was born November 26, 1971 in Rushville, NE the son of Ronnie and Jeanie (Kuskie) Snyder and was immediately joined by his identical twin, Lonnie Edward. He passed away on October 2, 2022 at home in Thornton, CO after a heroic battle with cancer.

He grew up south of Rushville and attended local country schools before graduating Valedictorian from Rushville High School in 1990. He graduated with honors from South Dakota School of Mines & Technology in 1994 with a double major in Computer Science and Electrical Engineering. In 2005, Ronnie received the Distinguished Recent Graduate Award from SDSM&T for his outstanding work in the computer science industry.

Ronnie married Amy Weyers of Hay Springs, NE on August 1, 1998 in Scottsbluff, NE. They lived in the suburbs of Denver, CO for 24 years. Ronnie and Amy were blessed with daughter, Alanna Marie, in 2005 and son, Kalon Mitchell, in 2006.

As a successful business owner of Zeotek, Inc. for 27 years, Ronnie enjoyed consulting in software development and was known for his quality work, attention to detail, unassailable integrity, and dedication to client success.

Ronnie was an avid fisherman, hunter, poker shark, and volleyball player and enjoyed coaching and cheering for his kids’ sports and activities. He loved strategy and card games. His competitive nature was second only to his witty humor, kindness and love of family and friends.

Ronnie was preceded in death by grandparents, Frank and Rosemary Kuskie; Woodrow and Charlyn Snyder and in-laws, Leo and Idonna Weyers, and brothers-in-law Dale Elson and Kendall Weyers.

A Celebration of Life will be held at Arvada United Methodist Church 6750 Carr St, Arvada, CO 80004 on November 5, 2022 at 1 pm. Ronnie’s true passion was his children, so, in lieu of flowers, a college fund has been established for Alanna and Kalon.