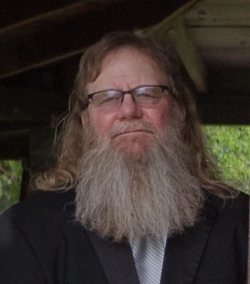 Kendall A Retzlaff was born on February 14, 1952.  He passed away unexpectedly at home on October 18, 2022.  Memorial services will be held at 11:00 a.m., Monday, October 24, 2022, at Pier Funeral Home in Lusk, Wyoming.  The family asks that you wear your favorite Nebraska Husker or Wyoming Cowboy apparel to the service.

Kendall “Blondie” was born February 14, 1952, to Harold and Nadine (Hoagland) Retzlaff in Gordon, NE.  He grew up in Clinton, NE, and attended Clinton School through his childhood years, later attending and graduating from Gordon High School.  Kendall was very athletic and outgoing, and a top competitor in his high school years and beyond.  He graduated high school in 1970.  After graduation, Kendall worked several odd jobs, including working for his father at the elevators in Clinton (Retzlaff Grain), owner of Western Bar, and Harris Sales.  Later dedicating his life / career to Chicago & Northwestern Railway / Union Pacific Railroad, where he retired after 37 years.  Kendall was an avid softball player, golfer, pool player, hunter, and outdoorsman.  He was a true Husker Fan, and his favorite saying was “we got ‘em right where we want ’em”, even if the Huskers were trailing by 20.

Kendall was married to Sharon Shedeed in 1972, and to this union three children were born:  Melanie Dawn was born in 1973, Robin Christopher was born in 1975, and Nichole Lynn was born in 1981.  Kendall later married his current wife, Dena (Larson) Retzlaff in 1997.  Together they built their “forever home” in 2008 on Indian Creek on the Larson Homestead, near Lusk, WY.  Kendall was a fun-loving husband, father, brother, and friend.  Always up for an adventure, and never turned down a cold beer.  He was known to many as “Blondie” for the notorious long blonde hair and spending more time in the bathroom than most women.

Kendall was preceded in death by his parents, Harold and Nadine Retzlaff.

Memorials may be made to the Niobrara County Golf Course.

Pier Funeral Home is in charge of arrangements.