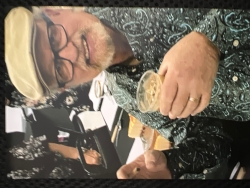 Fuzzy was born on December 22, 1951 in Valentine, NE to Donald Earl and Frances Ellen (Nollette) Stillwell.

Fuzzy Stillwell is the preferred name of Bob Michael Stillwell, who has entertained and walked us through the past 71 years. He left such an impression on anyone he came into contact with and probably most people have a “Fuzzy story”.

Fishing, peanuts in the shell, hunting, flavored coffee, creamer, CFPs (Chinese Food Places), not to be confused with CSB, which will have to remain a mystery as it is not appropriate to spell out. These are just some of the things that he enjoyed.

He loved family, but especially his wife of 47 years, his children and grandchildren. He was an animated storyteller, featuring life experiences, from childhood pranks to adolescent run-ins with the law. He certainly lived a colorful life. You may have heard some of these stories around the campfire during the fur traders rendezvous. Much of his advice began with, “what a guy ought to do… .“

He was a boxer, a hard worker, and quite a dancer. He definitely had moves better than Jagger. He had an original vocabulary and facial expressions to match. And these are just some of the things that we loved about him.

He had various careers in his lifetime, including Pabst Blue Ribbon beer man, a locomotive electrician for Burlington Northern and a self-employed rancher. He went from riding motorcycles to quarter horses, from ranching to retirement, from the ranch to the lake. However his most important job was that of husband, father, grandfather and friend.

He is preceded in death by his parents, Don and Frances Stillwell; sister, Doris (Pokey) Snyder and her husband, Jeff, brother-in-law Willie Kuntz and two nieces.

Mass of Christian Burial will be held 10:00 a.m. Thursday, January 12, 2023 at St. Nicholas Catholic Church in Valentine. He will be laid to rest in Mount Hope Cemetery near Valentine, Nebraska, the place of his birth, following the service.