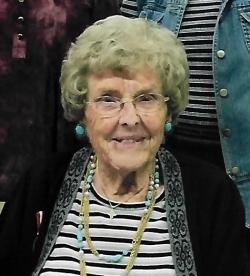 Lois Carol Rash was the oldest child born to Ross D. and Vera G. Cooper Rash on October 6, 1924, in Gordon. She was the older sister to Ross and Janet. Lois started school in Gordon and that is where she finished with the class of 1943. Following graduation, Lois attended secretarial school in Chillicothe, Missouri. After completing the course of study she and a friend ventured to Chicago when they both found employment with the Burlington Railroad. Lois remembered watching the Cubs play in the 1945 World Series from an upstairs window in a house close to the ballpark.

Following the close of Word War II, Lois and Kenneth Hull were married on July 5, 1946, at the Gordon Methodist Church. They made their home south of Gordon on the Loyd Hull Ranch where she learned to milk cows and became a ranch wife. While living there, January 15, 1949, Candace Diane was born. The family moved to the Pleasant Hill community in 1952 where they enjoyed neighborhood gatherings, and meals with friends and neighbors. Patricia Jean joined the family October 10, 1953. Lois lived here until after Kenneth’s death in 1973.

On December 6, 1974, Lois and Fred Hinton were married at the Gordon Methodist Church. Fred and Lois lived on Fred’s ranch south of Cody, Neb. where Lois became active in the Cody Methodist Church and the neighborhood extension club. They got a “little house on wheels” and enjoyed several vacations. After moving to Gordon in 1983, Lois enjoyed fixing the noon meal for all of her high school grandchildren and taking the younger ones on shopping trips to ALCO.

Lois enjoyed social gatherings of all kinds, including walking to the truck stop with the 2nd Street ladies every morning for Coffee. There were many family dinners and other celebrations held around her dining table, and she lived by the concept that life is what you make of it. She saw to it that she enjoyed each day.

The funeral service will be held on January 13, 2023 at the Gordon Methodist Church with Pastor Tom Peppel officiating. Burial will be in the Gordon Cemetery.