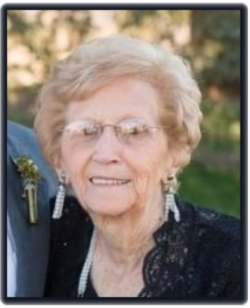 Margaret Luella Deines of Gordon, Nebraska passed away on December 5, 2022. She was born in Scottsbluff, Nebraska on August 4, 1938 to Ray and Bertha Stowell (Hewitt). She grew up in Scottsbluff and graduated from Scottsbluff High School in 1957.

Luella was the 10th child of 5 brothers and 5 sisters.

She worked as a Candy Striper at the Scottsbluff Regional Hospital. She then met the love of her life, Leland Leroy Deines, and they were married on July 1, 1959 in Bridgeport, Neb.

They soon moved to Rawlins, Wyo. where 5 of their children were born (Rusty, Cheryl, Shelly, Kevin, and Karen} In 1964, they moved to Sidney, Neb. where their 6th child (Mark) was born. They had 6 kids within a five year period. During that time Luella worked at a mouth guard factory for a couple of years. But her favorite job was taking care of her children. In 1975, Lee and Luella and their six children moved to Gordon, Neb., to start their own business, Lee’s Flooring. They have lived here ever since.

Luella’s big passion in life was in her husband, Lee. Their strong love and compassion for each other was inspiring. She always put other people’s needs ahead of her own. She loved spending time with her family. Whenever there was a family gathering, there was always a baby in her arms.

She is preceded in death by her parents Ray and Bertha Stowell, nine of her siblings Kathryn, Myrtle, June, Florence, Bill, Bob, Jack. Dorothy, Bert, their spouses, and her grandson Chad Lee Glassgow. She has also lost numerous nieces, nephews, aunts, uncles, and cousins.

In lieu of flowers a memorial has been established for medical expenses for Luella’s great granddaughter, Addaline Glassgow and donations may be sent to Chamberlain-Pier Funeral Home, PO Box 366, Gordon, NE 69343.