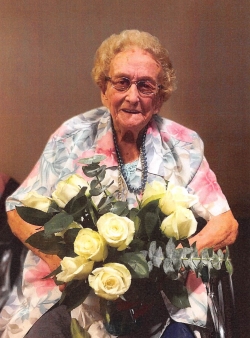 Marjorie Bertha Mary (Baldauf) Williams was born April 14, 1929, in Hay Springs, Nebraska to Joseph Baldauf and Mabel Opal (Fisher) Baldauf and passed away on January 1, 2023, in Seward, Nebraska at the age of 93 years, 8 months and 18 days.

Marjorie attended grade school in Clinton, Nebraska and graduated high school from Rushville, Nebraksa. Marjorie and Caleb Earl Williams were united in marriage on July 10, 1947, at Martin, South Dakota, and enjoyed 63 years of marriage. Marjorie was confirmed by Rev. Roth in the Missouri Synod Lutheran Church in Gordon, Nebraska, and was a long-time member St. Paul’s Lutheran Church in Rushville. She was a member of St. Andrew’s Episcopal Church in Seward in her later years.

Marjorie spent the majority of her life ranching with her husband Earl, north of Rushville.  She worked in the school system at Pine Ridge, South Dakota for several years. They then were owners and managers of Husker Feed Center in York, Nebraska, for 6 years followed by 13 years as the managers of the Seward Super 8 Motel. Marjorie was especially proud of earning the National Crystal Pineapple Hospitality Award from National Super 8, Inc. in 2001.  They retired to Goehner in 2003 and enjoyed traveling and visiting family.  Marjorie spent her last 7 years as a resident of Ridgewood Care Center in Seward.

Marjorie was dedicated to her family, was an excellent cook, hard-worker and businesswoman. She loved the outdoors, flowers and nature. She loved spending time with her grandchildren and great-grandchildren. Even in her later years, she loved seeing photos of them and smiled in recognition of them.  Education was extremely important to Marjorie, and she was very proud that all of her children attained master’s degrees and all of her grandchildren completed college. Marjorie was a special mom, grandma, great-grandma and great-great-grandma. She will be missed dearly – You are our sunshine!