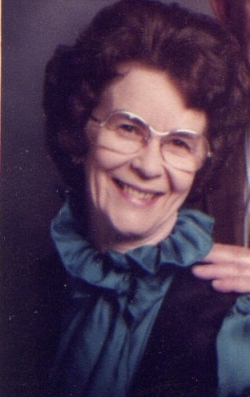 Mary Rose Reid loved to tell people that she was born in the Rushville Museum.  The house, which would later become the Museum, was at the time of her birth, owned by John and Mary Schreurs and her mother had come to town to stay with them until her baby was born.  Mary Rose was born June 8, 1924, to Mathias and Nora Roffers in Rushville, NE.

Mary Rose grew up on a farm northwest of Rushville with her sisters, Alice, Catherine and Noreen and brother Billy.  She attended rural schools and learned the value of hard work and the joy of living from her mother.

Some of her fondest memories as a child were of time spent at the home of her grandparents, William and Kathryn Spielman, in Rushville.  Her family would have dinner there on Sunday and after dinner they would have music in a large room with hanging lamps, tables, big comfortable chairs, a writing desk, and several organs and two pianos.  Her Uncle Bill played the violin, her dad the button accordion and her mother the piano.  Others from the community would come and bring their instruments for a wonderful time!

Mary Rose graduated from Rushville High School in 1943 and started spending time with Bud Reid, the brother of her good friend Norma.  She taught rural school starting in the 1943-44 school year at District #58.  The following year 1944-45 she taught at District #22, Bud’s home school and stayed with the Dohrman family whose children Delores and Billy were her students.

Benjamin Howard Reid and Mary Rose Roffers were married on June 8, 1945, at the St. Mary’s Parsonage in Rushville, NE.  After a short honeymoon to Denver Bud was off to the service.  Mary Rose taught school the 1945-46 year at District #14 where she had gone to grade school and stayed with her parents.

Bud was home from the war in November of 1946.  They moved to Chadron and he worked at the Gambles Store and later as parts man at the John Deere dealership owned by his brother-in-law Don Faulk.  Their sons Glenn Alan (1947) and Kenneth Dean (1952) were both born in Chadron.

Bud’s dad, Ed Reid, died in 1952 and Bud was asked to take over the farm.  The family moved to the Reid farm south and west of Rushville in November of 1952. Shirley was born in 1956. After several years of crop failure, they had to leave the farm in 1965.  The family moved to Rushville until Glenn graduated from high school.  Bud then got a job doing carpentry work in Hastings and they moved to a house next door to Mary Rose’s sister, Noreen.  Mary Rose did childcare in her home until 1972 when she was offered a position at Keller Implement.  She remained there until her retirement in March 1987.

After their retirement, Bud and Mary Rose enjoyed traveling across the country visiting National Parks, community festivals and family and friends.  Bud died on July 26, 2017 at age 95, in Hastings and Mary Rose continued living there, still next door to her sister Noreen.  Because of declining health, she moved to El Paso, TX in 2021 to be with her daughter Shirley and died there on December 15, 2022, at age 98.

Mary Rose Roffers Reid was an energetic woman and a meticulous housekeeper who dusted while dancing to the sounds of polka music.  She was never afraid to share her opinion.  She will be remembered for her laughter and love of family, dancing, and music.