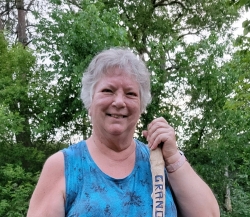 Debra Louise (Johns) Ainslie was born in Gordon, NE on the 15th of July 1955, the first of three daughters born to Orvis and Peggie Johns.  After graduating from Gordon High School, Debra moved to Scottsbluff to attend beautician school.  While there she was joined in marriage to Tom Ainslie of Hay Springs.  To this union were born three children, John, Tereasa and Connie.  Tom and Debra eventually returned to Gordon.  Debra worked at Gordon Memorial Hospital. After her divorce she moved to Chadron to attend Chadron State College where she obtained a Master’s Degree in Business Administration.  Debra then moved her family to Hay Springs and got a job at the Chadron Memorial Hospital as a Ward Clerk.  After 31 years in that job she retired in 2018.  Shortly after her retirement, Debra was diagnosed with cancer.  After a 5 year battle with cancer she left this world to be with her Lord and Savior on January 8, 2023.

Over the years Debra dedicated her life to her children and grandchildren, serving as a Cub and Boy Scout Leader, Girl Scout Leader, basketball Mom, band Mom, and anything else that her family was involved in. As well as being a car seat technician and CPR instructor. She played bells with the Hay Springs Methodist Church Joy Bells for over 30 years.  Debra loved camping, boating, water skiing and helped teach numerous kids to water ski. Debra loved to crochet, keeping all of her daughters, sisters and nieces supplied with handmade dish cloths.  As well as baking cookies and decorating cakes. She loves to travel to see family and tour places.

Debra was preceeded in death by her Grandparents, Merle and Myrtle Spindler and Alvin and Mabel Johns, her parents, Orvis and Peggie Johns, her sister Sharon Dexter, her exhusband, Tom Ainslie and several cousins.  She is survived by her son, John (Dawn) Ainslie of Katy, Texas; Tereasa (Ronnie) Herman of Chadron and Connie (Dallas) Hitzel of Burlison Tennessee.  Her sister, Carolyn (Dan) Seidler of Alliance, her brother-in-law Monte Dexter of Alliance, one aunt Lynn Sullivan of San Juan Capistrano, California; her beloved grandchildren Houston Ainslie, Michael Herman, Joseph Herman, Brook Herman and Joshua Hitzel, as well as numerous nieces and nephews, cousins and friends.

More in this category: « Geri Landreth