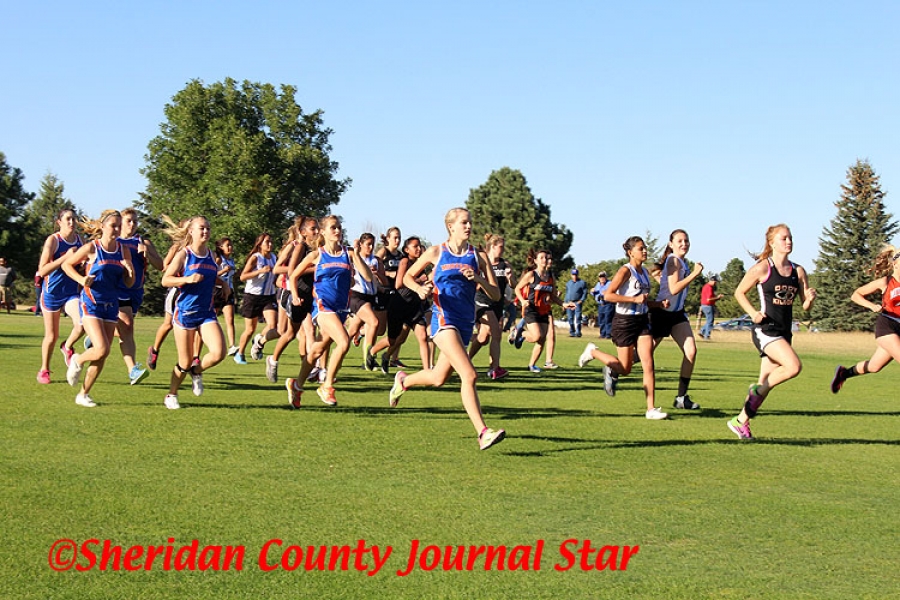 Gordon-Rushville hosted a cross country meet last Thursday at the Gordon Country Club. The Mustangs had a great run with the girls winning the team title. Photo by Janet Skinner

The Gordon-Rushville Cross Country teams held their home invitational this past Thursday at the Gordon Country Club. It was a beautiful day for running and the Mustangs made the best of it.  The Lady Mustangs won the team title led by Dani Wellnitz, who won the individual title in a time of 20:28. A number of Mustangs placed in the top ten and numerous others ran their best times of the year.

The J.H. runners got the day started off right for the Mustangs.  All three J.H. ladies medaled in the girls portion of the race. Autumn Richards led the way for the girls placing 4th in a time of 10:47. Reann Ferguson placed 7th (11:18) and Callie Shultz rounded out the medalist finishing 10th   in a time of 11:57.  Darrin Archibald was the first boy runner to cross the finish line. He placed 5th in a time of 10:28, just ahead of Ryan Wellnitz (10:33) who placed 7th. Michael Tiensvold placed 12th in a time of 11:42.

The Mustang boys team continued to show improvement as times continued to come down. Freshman Juan Sanchez led the way for the Mustangs crossing the finish line in 20:11. Michael Barth and Mace Bixby finished 26th and 29th respectively. Barth ran a season best time of 21:03 and Bixby finished in a time of 21:38. David Birkbeck, Wade Bergman, and Justice Flick continued showing improvement. Birkbeck finished in a season best time of 23:12. Bergman (23:30) and Flick (24:22) cut over a minute off their previous season bests.

“I am very pleased with the progress we are making right now. The kids are learning how to work hard in practice and it is starting to show in the meets. It is great that our girls were able to win the team championship this week,” said Coach Nelson. The Mustangs will be traveling to the always-tough UNK Invite in Kearney on Monday and to Bayard on Thursday for the Mark Matthews Memorial Invitational.

More in this category: « High school rodeo team heads to State Finals Hawks bounce back with big win over Leyton »