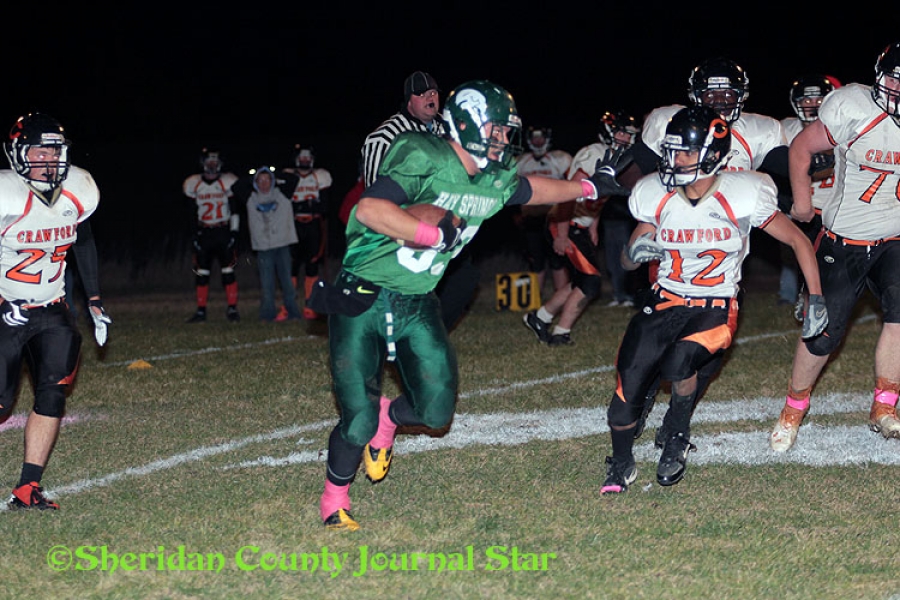 Stevin Horrocks has been an unstoppable runner for the Hawks this year. Photo by Jordan Huether

The Hay Springs football team was dominate in their win over Crawford on Thursday night in Hay Springs.  With a 57–0 win the Hawks improve to 5-2 on the season.  “I was really pleased on how we played against Crawford,” said coach Jason Funk. “The guys were able to get out to an early lead and they never let down. We were able to get our reserves in the second quarter and they played the rest of the game. It was great for the young players to get to play a significant amount of playing time and they really performed well”.

The Hawks were able to hold the Rams to a total of 47 yards of offense while amassing 331 yards of offense. Senior running back Stevin Horrocks was able to gain 102 yards on just 3 carries.  Quarter back Joey Johnson also had a good game both running and passing the ball, as well as returning a kickoff for a touchdown.

Horrocks took his first handoff of the game 29 yards for the Hawks’ first score of the game. Jordan Houser added the PAT putting the Hawks up 8-0. Less than a minute later, Levi Ray intercepted a Crawford pass and ran it back 20 yards for another touchdown. Joey Johnson added the PAT.

With less than five minutes left in the 1st quarter, Horrocks scrambled 48 yards for his second touchdown of the game, breaking several tackles, then added his own PAT. On the Hawks’ next series Joey Johnson found a wide open Austin Reed for a 27 yard touchdown pass. The PAT was no good giving the Hawks a 30-0 lead at the end of the first quarter.

Horrocks started the second quarter with another big run, getting the Hawks to the two-yard-line where quarterback Joey Johnson ran in for a touchdown. The Hawks added 2 with a pass to Levi Ray to go up 38-0. With several reserves now in the game, the Hawks slowed things up a bit, not scoring again until Austin Reed broke free for a 24 yard run with time running out in the first half. The PAT was no good, giving the Hawks a 44-0 lead at the half.

Joey Johnson wasted no time in the second half, returning the opening kickoff 57 yards for a touchdown. Jordan Encinia’s PAT kick was good to give the Hawks a 51-0 lead. With time winding down in the third, Matthew Hessler ran 3 yards for the Hawks’ final score of the game. The PAT was no good. The Hawk defense was able to hold the Rams scoreless, making the final score 57-0.

Leading tacklers for the Hawks were Joey Johnson, Tyler Merritt, Garrett Weyers, Austin Reed, Stevin Horrocks and Riley Abbott. The Hawks rushed for 291 yards and passed for 40 in the big win.

Next up for Hay Springs is their final regular season game at Potter-Dix.  “The Coyotes are a dangerous team on offense with many different options to throw at you,” stated Funk.  “They are able to pass and run equally well and we have struggled against the pass all year. We will stick to our run heavy offensive attack and I pray we can slow down their offense,” siad Funk. “Our guys are excited to finish the season strong.”