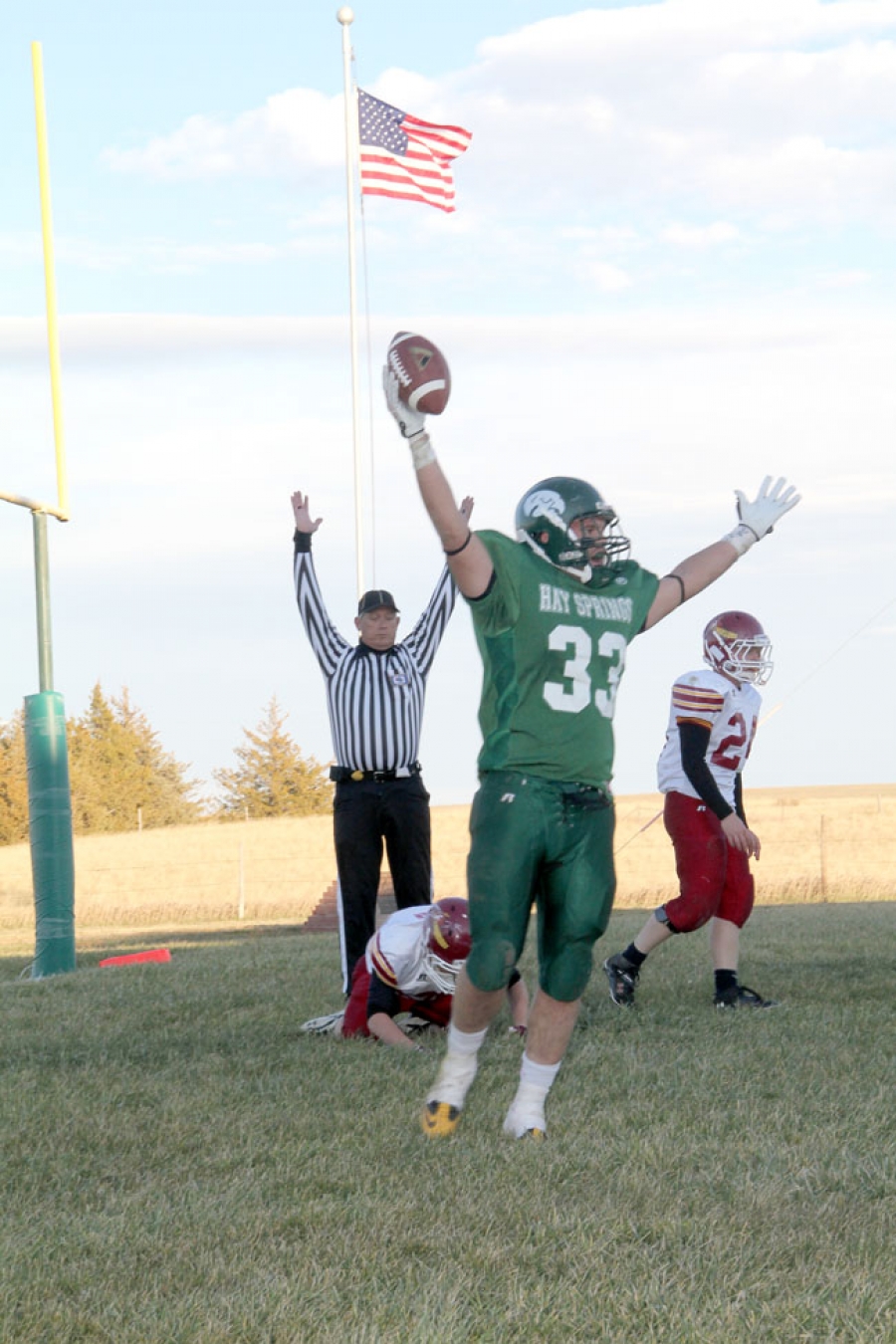 Stevin Horrocks celebrates after scoring a touchdown against the Leyton Warriors. Photo by Clint Andersen

The Hawks earned their first playoff win last Thursday night against a tough Leyton squad. The Hawks trailed the Warriors 16-6 early in the 3rd quarter before the Hay Springs offense started to gain traction. Lead by the tenacious running of senior tailback, Stevin Horrocks, the Hawks were able to grind it out in the second half to secure the victory 36-16. “We were in a dog fight for most of the game. Leyton was able to handle us in the first half, but I had confidence that our rushing attack would eventually wear them down,” stated Coach Jason Funk. “I am so proud of the way our men battled in this game. They really showed heart to keep their heads in the game when we got down,” said Funk.

The offense was powered by Horrocks, who ended the game with 141 yards on the ground and four touchdowns. Quarterback Joey Johnson also had a solid day throwing the ball, with 92 yards and two touchdowns. Sophomore end Austin Reed had a stellar game both on offense and defense. “Austin played the best I have seen him play this year against Leyton. He made some critical catches when we needed them and he was all over the field making plays on defense,” said Funk.

Leyton got on the board first with a 41 yard touchdown pass midway through the second quarter. Stevin Horrocks returned the ensuing kickoff 44 yards to the Leyton 18 yard line. Six plays later, the Hawks added six of their own on a 13 yard pass from Joey Johnson to Horrocks. The PAT was no good, leaving the Hawks down 8-6 at the half.

Leyton started the second half by marching 67 yards in under two minutes to score their second and final touchdown of the game. The Hawks answered back with another Stevin Horrocks touchdown, but again the PAT was no good, making the score 16-12 Leyton. With time running out in the third, Johnson connected with Chris Ray on a 27 yard touchdown pass to give the Hawks their first lead of the game. Johnson added the PAT to put the Hawks up 20-16.

Horrocks kept things going for the Hawks in the final quarter, scoring two more touchdowns. Joey Johnson added the first PAT, then threw pass to Levi Ray for the second to give the Hawks the 36-16 victory.

Next up for the Hawks is the second round of the playoffs, where they face number one seed Wallace. Wallace is 8-1 and coming off a 44-8 thumping of Brady in their first round game. “Wallace is as good a team as I have seen all season,” stated coach Funk. “They have an outstanding QB and one of the fastest running backs I have seen the last few years. We have our hands full with them, but our guys are healthy and ready to play, and not intimidated by their size and speed.”