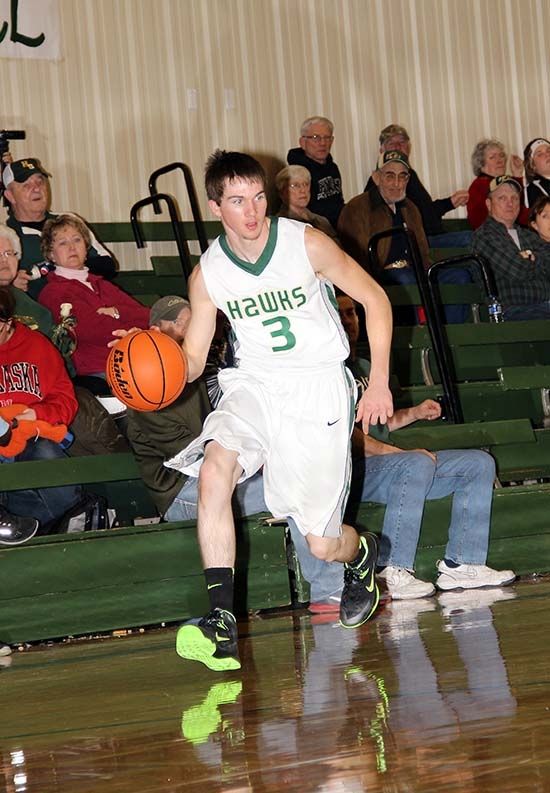 The Hay Springs Hawks have finally done it! After opening the regular season with 19 straight losses, the boys basketball team came up with a big win last night at home, defeating Hyannis in a one point thriller, 56-55.

The Hawks clung to a one point lead in the first quarter, 16-15, but were able to extend their lead to six, 28-22, by halftime. The Hawks were on fire at the start of the second half, extending their lead to 14 at one point before Hyannis came charging back, scoring 25 points in the fourth quarter.

With only twenty seconds left in the game, the Hawks clinging to a three point lead, Hyannis stole the ball and made a lay-up with only 16 seconds remaining to pull within one. Hyannis brought a full court press on the Hawks and forced the Hawks to throw the ball out of bounds with 13 seconds remaining. Hyannis missed a shot and knocked the ball out bounds, giving the ball back to the Hawks with clock down to just 6 seconds. As soon as the Hawks inbounded the ball, Hyannis tied up Riley Abbott for a jump ball, which went to Hyannis. Hyannis had one last look at the basket as time ran out, but the ball was in and out as the buzzer sounded, giving the Hawks their first win of the season, 56-55.

The Lady Hawks were unable to come up with the win over the Lady Longhorns, dropping their record to 7-14. The Hawks trailed by only one at the end of the first quarter, 11-10, but Hyannis extended that to four, 29-25, by halftime.

The Lady Hawks came back to tie things up at 38 in the third quarter, but Hyannis dominated the fourth quarter, scoring 19 to Hay Springs’ 6, to take the 57-44 victory.

Our full video broadcast of the game is still available here!