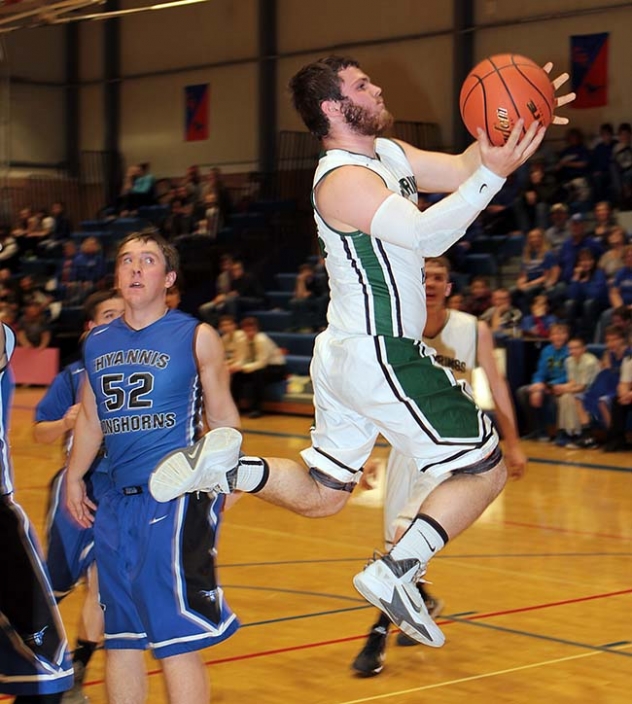 Hay Springs' Austin Reed goes up for a layup against Hyannis Tuesday night in the subdistrict D2-12 opener in Gordon. Photo by Jordan Huether

The Hay Springs Hawks and Gordon-Rushville Mustangs began subdistrict play Tuesday night, with hopes of advancing to their respective subdistrict finals on Thursday. Hay Springs faced Hyannis (14-8) in Gordon Tuesday night, falling by a final score of 60-42. Gordon-Rushville travelled to Alliance to take on Mitchell (5-19), sending the Lions home with a 52-36 defeat.

Hay Springs traded baskets with Hyannis throughout much of the fist half, the lead changing several times, but a late first half Longhorns rally that Hyannis carried into the second half put the Hawks down for good. With the 60-42 victory, Hyannis goes on to face Crawford Thursday night in Gordon. Hay Springs finishes their season with a record of 5-16. No additional stats were available for the game.

Gordon-Rushville found themselves trading the lead with Mitchell early on in the game, but quickly found their composure and pulled away to a 27-17 lead at the half. The Mustangs continued their dominance into the second half, downing the Tigers 52-36 to advance to the subdistrict C1-12 championship Thursday night in Alliance. The Mustangs (17-5)will face Chadron (10-11) to determine who goes on to the district final Feb. 29. Chadron comes off a 56-34 win over Kimball (7-14) Tuesday night. If you can't make it to the game, tune in to our live video broadcast here.