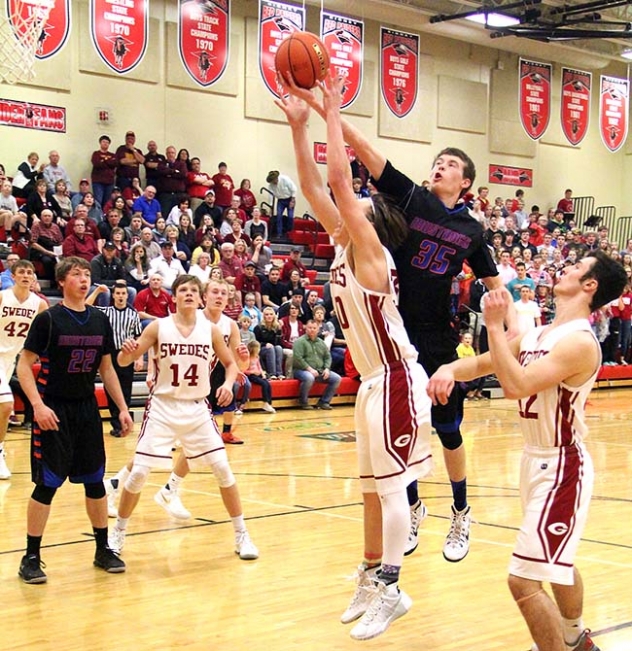 Gordon-Rushville’s Sean Combs pulls a rebound away from a Gothenburg Swede Monday night in the District Finals in Sidney. Photo by Jean Andersen

The Gordon-Rushville Mustangs ended their season Monday night in the C1-6 district final with a loss to Gothenburg, 58-44.  The loss ended a nine-game winning streak and a tremendous late season run that saw the Mustangs claim the Western Trails Conference crown and battle their way through sub-district play to earn their spot in the district final.

The Mustangs began sub-district play against Mitchell on Tuesday.  The Tigers tried to keep Ryan Schwarting off of the scoreboard by playing a box-and-one defense where they guarded Ryan in tight man-to-man defense while the other four players played a zone defense in the paint.  The strategy worked as they held Ryan to just four points, but they failed to account for Dylan Schwarting and Jared Nelson, who each stepped up and scored 16 points to fill the scoring gap.  The Mustangs slowly but steadily pulled away from Mitchell, outscoring them in each quarter.  The final score was 52-36 as the Mustangs advanced to the sub-district final on Thursday.

The sub-district final on Thursday night matched the Mustangs against the rival Chadron Cardinals.  Chadron came into the game with a 10-11 record, but all of their losses had come to Class B competition.  The Cardinals had defeated Gordon-Rushville twice this season, but the Mustangs were playing their best basketball of the year and carried an 8-game winning streak into the contest.

The game got off to a slow start as both teams played outstanding defense to prevent any offensive flow for either side.  The Mustangs were able to connect from long range and bagged five 3-pointers to capture a 15-10 lead at the end of the first quarter.  The second quarter was a different story as Chadron held the Mustangs to a single made free-throw in the quarter.  However, the Mustangs held Chadron to just seven points and the Cardinals held a 17-16 lead at the half.

Chadron extended their lead in the third quarter and had a 32-28 advantage as they headed to the fourth quarter.  The Cardinals’ lead expanded to seven points midway through the fourth quarter, but the Mustangs went on a 9-2 run to close out the game and had a chance to win the game at the buzzer.  The teams ended regulation tied at 37 and headed to overtime.

Chadron scored the first two points of overtime, but Ryan Schwarting answered with a 3-pointer from the top of the key with 2:08 left to put the Mustangs ahead 40-39.  Schwarting added two free throws with less than a minute left and the defense locked down the Cardinals to salt away the victory and advance to the district final.

The win propelled the Mustangs into the C1-6 District final on Monday night against the Gothenburg Swedes (19-7).  Gothenburg jumped out to a 16-0 lead, using an extended zone defense to prevent Gordon-Rushville from finding an offensive rhythm.  The Swedes held a 19-7 lead at the end of the first quarter and extended the lead back to 14 with under 2 minutes left in the half, but the Mustangs clawed their way back into the game with a 7-0 run to close out the quarter with the halftime score 28-21.

Having outscored Gothenburg 14-9 in the second, the Mustangs came out of halftime with renewed confidence and won the third quarter as well, narrowing the lead to 38-36 with :25 left in the third, but it was as close as they would get.  Gothenburg answered with a three pointer to stretch the lead back to 41-36 as the fourth quarter began.  The Mustang momentum continued through the opening minutes of the fourth quarter, but Gothenburg took control and pulled away down the stretch to take the win by a final score of 58-44.  The Swedes earned a well-deserved spot in the state tournament March 10-12 in Lincoln.

The Mustangs finish the season as the district runners-up with an 18-6 final record.  This was an outstanding season for Gordon-Rushville.  After winning just four games last season, they showed immense improvement and finished just one win away from the state tournament.  This very young team will miss the senior leadership provided by Ryan Schwarting and Rhett Conroy, but the future is very bright as the Mustangs look ahead to next year.