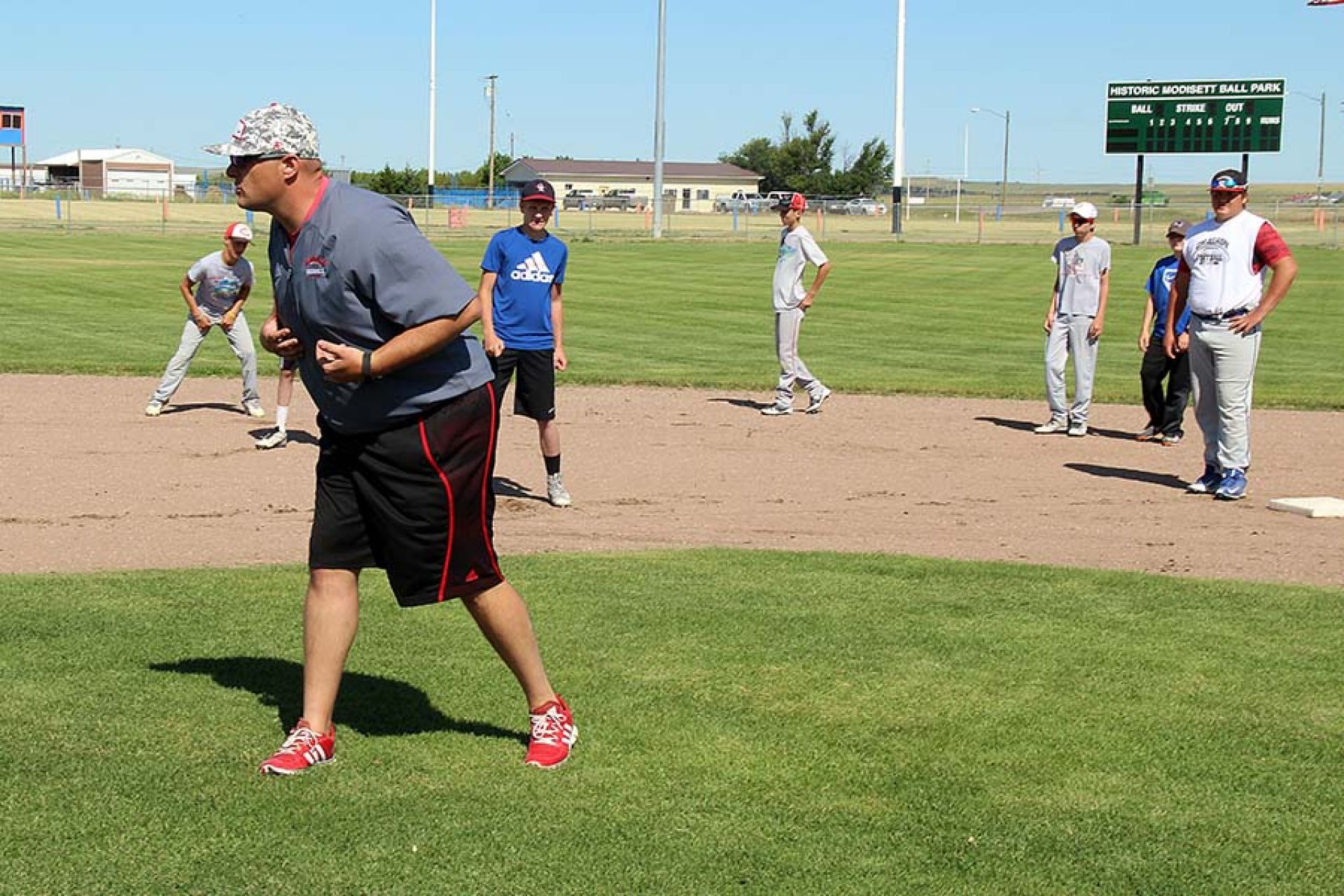 Ledbetter acts as pitcher during a second base footwork drill. Photo by Lauren O’Brien

Young baseball players traveled to northwestern Nebraska on Wednesday for the Nebraska Baseball Academy baseball camp. The camp was from 9 a.m. to 2:30 p.m. at Rushville’s Modisett Ball Park. The temperature was in the low 70’s for most of the morning before climbing to the low 80’s in the afternoon. The camp used the three fields at Modisett Park for drills.

There were 88 players signed up for the camp with around 82 present. After the players arrived, members of the Huskers baseball team were introduced by Curtis Ledbetter, the director of the Nebraska Baseball Academy. Ledbetter was impressed with Rushville’s baseball field. “It is the best complex we’ve been to so far this year,” he said. “You should be proud of it.”

After the players stretched, they were assigned group numbers, with catchers being separated from everyone else. The catchers went to the south field for drills while the others remained on the main field for throwing and running instructions. Players learned that the proper foot placement on first base was at the front center side of the base to ensure players did not roll ankles and they could run through the base quickly.

Ledbetter explained how teaching young players baseball can be tricky. “We’re just trying to make it easier on them,” he said. “We’re trying to have fun and we’re trying to teach the basic skills of the game and we feel like some of the stuff is going to be new, some of this stuff might be review, but they’re hearing it from another voice.”

The camp coaches are players and staff members of the Huskers’ baseball team. They go to multiple camps during the summer after an invitation from a member of the community. Rushville was their third stop that week. First, they held a camp in Ogallala, Neb. on Monday, June 20, before going to Scottsbluff on Tuesday. On Thursday, they traveled to Ainsworth, which was their last stop for northwestern Nebraska. The team had not been out in the area for several years with the last time being in Chadron before Ledbetter was apart of the program.

The history of Modisett Ball Park on June 22 held special meaning as the camp took place. During June 20 through 22, 1956, the Milwaukee Braves hosted a baseball camp at Modisett Park.  On the 60 year anniversary of the Braves in Rushville, the next generation of baseball players learned the game while having fun as they dream of walking in the footsteps of Braves’ players that came before them.

“Obviously, we want to have fun out here. That’s what it’s all about,” said Ledbetter. “You know that’s what this game is all about, especially for the youngsters.”