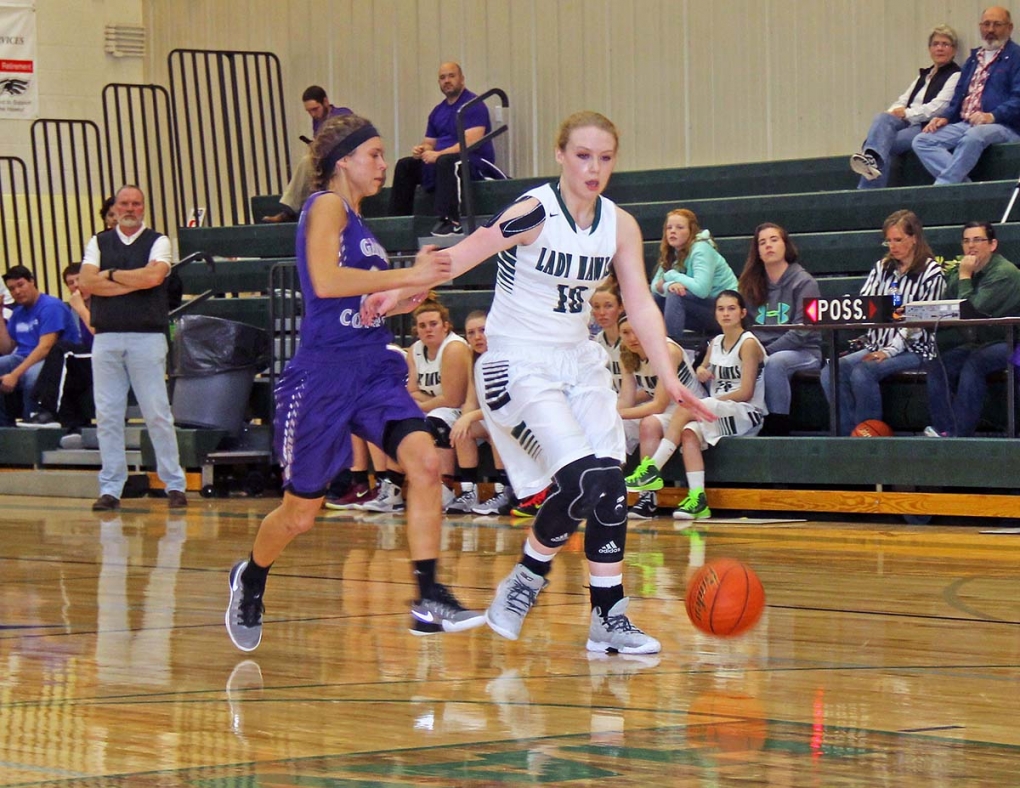 Emma Roberts had a great season for the Lady Hawks, leading the team in points, rebounds and assists. Photo by Lauren Brant

During the third quarter, the Lady Hawks defense was strong as they limited the Rams to six points. Their man-to-man coverage helped them narrow the Rams’ halftime lead to only five points. Offensively, they struggled to make shots as Emma Roberts scored 23 points out of the total 40 points.

The Lady Hawks lost to the Rams 44-40, ending the rivalry in a 2-2 record for the season. They ended their season with an overall record of 11-12 and a district record of 5-4.

Coach Jason Badje said the team improved on fundamentals over the season. “The girls gained so much from last year and I hope they will keep building on that next year,” said Badje.

The Hawks’ Emma Roberts had a standout year as she led the team with thirteen points, five rebounds and two assists per game. Senior Tanna Badje averaged nine points, 7.5 rebounds, 2.5 assists and 2.8 steals a game. Ciara McCance had several double-doubles during the season and Hailey Summers shined in a few games.

Looking back on the season, Coach Badje said the Sioux County game was the most memorable. The Lady Hawks defeated the Warriors on January 21 despite being seated two spots below them. The Warriors trailed at the end of each quarter but made a run in the fourth to try and overtake the Hawks. The Lady Hawks held them off and won 53-47.

Coach Badje described the season as high blood pressure with the several close games that sometimes went in the Hawks’ favor. Badje said he “wouldn’t trade them for any other team, even though we ended up one game under.500.”

As the off-season begins, Coach Badje hopes the team challenges each other to practice their ball-handling and shooting. By developing a foundation, they can build on their skills next season and work toward bringing back the school’s tradition of a championship.