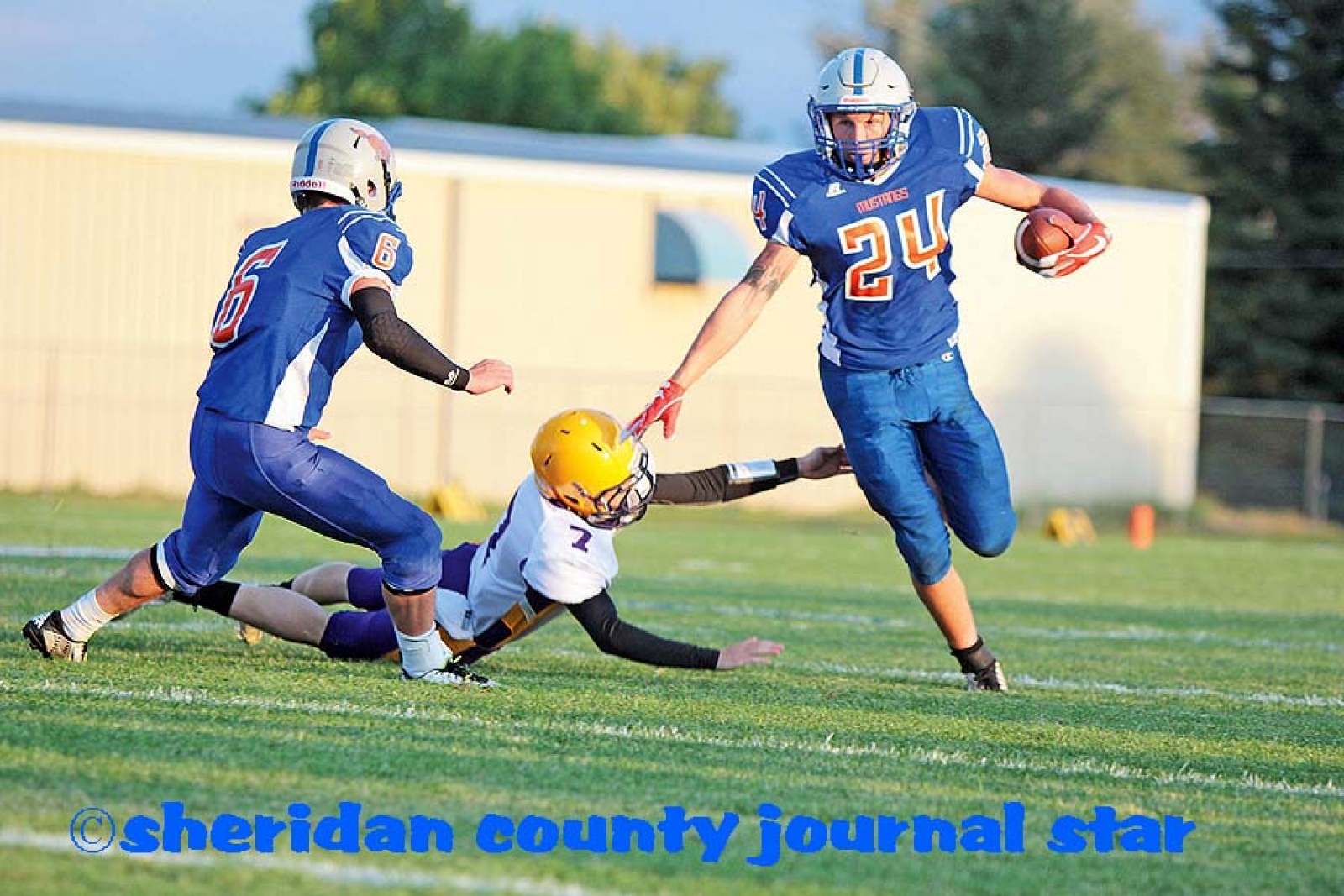 The Gordon-Rushville football team continues to dominate the competition, with the Bennett County Warriors as their latest victim. The 63-0 victory Friday night marks the third straight game the Mustangs have won by 30 points or more.

Before the game, coach Lindholm said he wanted to establish the run game early on before taking it to the outside. They did just that, scoring right away on a string of strong runs up the middle by senior Korby Campbell, punctuated by a sweep around the outside into the endzone to go up 7-0 with almost 10 minutes left in the first quarter. Jarrod Nelson picked up the PAT.

The Mustangs defense held BC to a four-and-out, then struck again when quarterback Carson Hinn found Jarrod Nelson in the corner of the endzone from 20 yards out. Bennett County’s Isaiah Johnson found some room on the ensuing kick return, but was brought to a halting stop on a big hit by Korby Campbell. The Mustangs defense again limited BC to just four plays, this time forcing -2 yards of offense before Andrew Higgins returned the Warriors’ punt to near mid field.

Carson Hinn felt pressure from the sides most of the night, but was able to step up in the pocket and find one of his receivers more often than not.

Leading 14-0 at the start of the second quarter, the Mustangs quickly struck again on a five-yard run by Morgan Hurlburt, capped by Nelson’s third straight successful PAT to go up 21-0. With the Warriors looking for a big play to get some momentum, quarterback Daniel Winsand threw a deep pass that was picked off by Hurlburt at the Bennett County 38 yard line. The Mustangs scored on the next play, a strike from Hinn to Jarrod Nelson down the right sideline.

Bennett County finally forced the Mustangs to punt midway through the second quarter, but were again unable to capitalize on the opportunity, eventually punting the ball back to the home team. After a big run by Campbell put the ball at the Warriors 1, Jarret Pieper punched it in for the fifth touchdown of the half. The Mustangs picked up two on a successful conversion run by Korby Campbell to go up 35-0.

With time ticking down in the first half, the Mustangs again looked poised to score when a Bennett County defender stripped the ball from Campbell. The play was errantly blown dead by a referee, so the Warriors were unable to advance it. Campbell made amends on the next play, assisting in a 7 yard sack, which quickly stopped the momentum.

Both teams started the second half with great defensive efforts forcing consecutive punts. On their second possession of the half, Bennett County, looking to convert on 3rd and 15, attempted a backward pass that was dropped and scooped up by Morgan Hurlburt. Hurlburt took the ball 40 yards to the endzone to put the Mustangs up 41-0 after a failed PAT, turned 2-point conversion attempt. The Mustangs quickly found the endzone again on a 22-yard run by Campbell to put GR up 48-0 after a successful PAT by Nelson as time ran out in the third quarter.

The Mustangs scored twice more in the fourth quarter, first on a 6-yard run by Tommy Bragg and successful PAT by Nelson. Then, a drive consisting of only two good runs by Kaden Vincent put them into the endzone for the final time. Quarterback Corbin Bailey found Robert Reina in the corner of the endzone for a successful 2-point conversion for a final score of 63-0.

The boys will now travel to Mitchell this Friday to take on the 3-1 Tigers at 6 p.m. If you can’t make it down, watch all the action live at youtube.com/scjournalstar

View the embedded image gallery online at:
https://sheridancountyjournalstar.net/sports/item/4187-mustangs-shutout-warriors-on-homecoming-for-third-straight-win#sigProIddbed7b7063
More in this category: « Hawks football get a win during Homecoming Lady Mustangs, Lady Lions come together after volleyball match to remember Lily Martin »