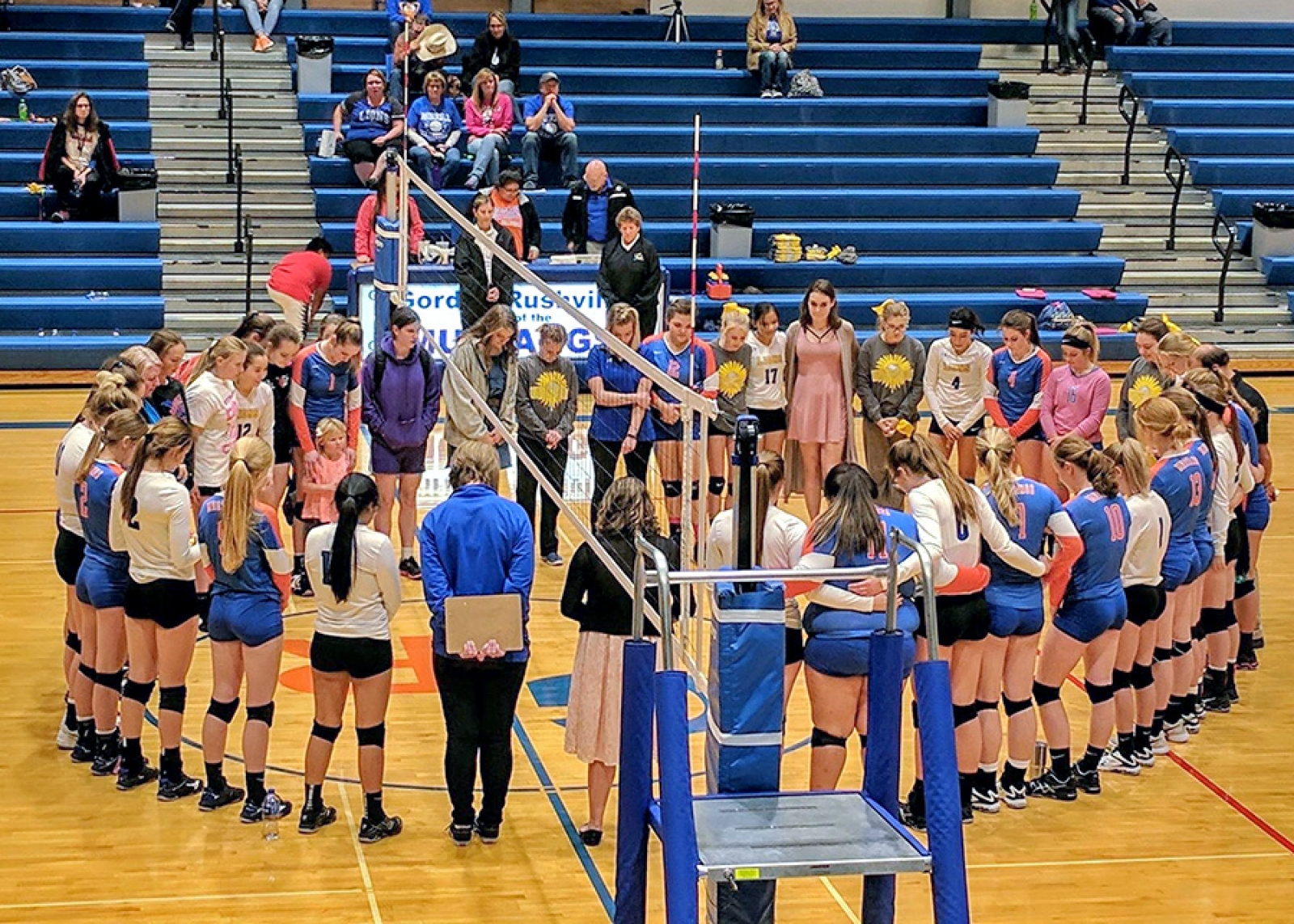 After the Lady Mustangs dominated on the volleyball court against the Morrill Lions on Tuesday, October 17, they recognized the loss of Morrill Lion Lily Martin.

Martin was a senior at Morrill High School who lettered in three sports. In late August, Martin was tragically killed in an auto accident.

Coach Kim Turnbull-Campbell talked to her team after the accident and asked if they wanted to do something. “We brainstormed what we could do and it was brought up that the shoe tags are pretty important to us as a team,” wrote Coach Turnbull-Campbell. “So maybe it would be really nice to pass something along to them that means so much to us.”

The Lady Mustangs shoe tag tradition began shortly after Coach Turnbull-Campbell started. She writes motivational phrases or something specific from that week for the team to discuss in the locker room.

As the Lady Mustangs brainstormed quotes to put on the shoe tag for Martin’s recognition, several words were tossed out as they narrowed it down to two phrases: “Strength grows in the moments when you think you can’t go on but you keep going anyway” and “grow through what you go through.” They chose the second one and wrote it onto the shoe tags followed by a heart and the initials LM and another heart. Coach Turnbull-Campbell said, “Listening to them talk about the shoe tags and what quote and working together to find one that they all felt was the one was a very proud moment.”

After the volleyball game concluded on Tuesday, October 17, both teams gathered around the net and Mustangs team captain Gracey Perez shared how much they cared and the meaning behind the shoe tags and quote. “I felt that it was a duty of mine as a captain and close friend to [the Lions] to step in and say something,” wrote Perez. “I’m very close with some Morrill girls and seeing them hurt really hit home.”

Perez said the experience built up her courage to speak in front of both teams and coaches and it was a moment she will never forget.

The volleyball game between the Lady Mustangs and Lady Lions was insignificant to the actions the Mustangs displayed after the game. “There is so much more to sports than wins and losses,” wrote Coach Turnbull-Campbell. “So many life lessons are wrapped up in sports.”

Sportsmanship occurs on and off the court and the Lady Mustangs exemplified that by offering their condolences and a tradition to remember Lily Martin.