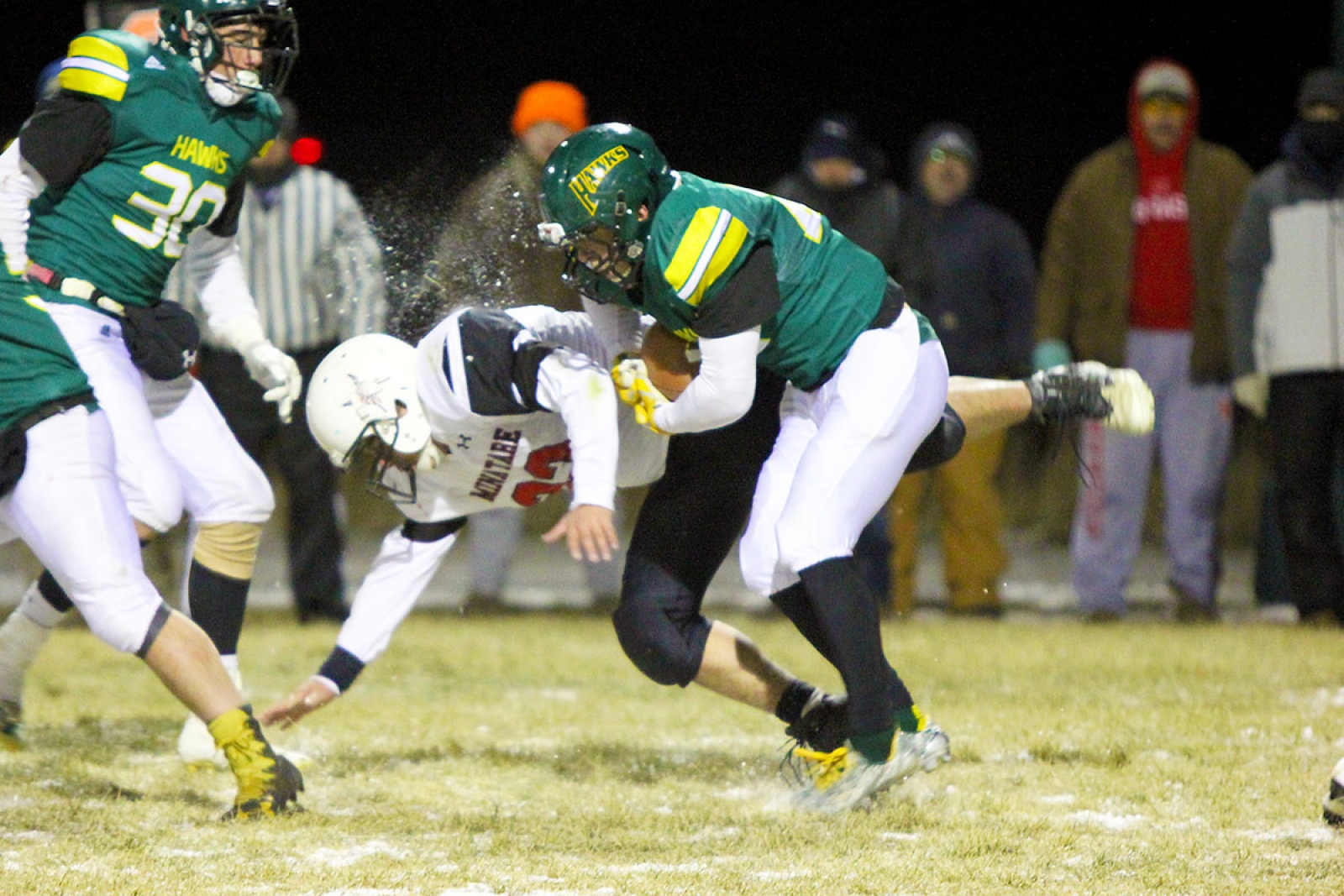 Hay Springs senior running back Jarret Pieper runs through a Minatare defender in the Hawks' 38-0 win over the Indians in the Nebraska D-6 semifinal game. Photo by Jordan Huether

The Hay Springs Hawks football team has something special this year. They continued to prove that Friday night with a 38-0 performance over the Minatare  Indians in the Nebraska D-6 semifinal game on their home field. The Hawks have outscored their opponents 154-27 through the first three games of the playoff bracket. They now advance to face the undefeated Wilcox-Hildreth Falcons Friday, Nov. 16, at 6 p.m. MT in Kearney.

Hay Springs jumped out to a quick 13-0 lead over Minatare on two touchdown runs by Trent Reed before things slowed down with the cold weather. Both teams experienced multiple turnovers and dropped passes as the frozen pigskin proved to slippery. The Hawks came out of the locker room with renewed vigor in the second half, and quickly racked up 19 more points with another run by Trent Reed and two big receiving touchdowns by Brodey Planansky in the third quarter. Jarret Pieper would find the endzone on the ground in the fourth quarter to seal the win.

The undefeated Hawks were led by freshman quarterback Logan DeCoste, who was 2-6 passing for 73 yards. Trent Reed completed the only pass he threw, good for 44 yards.

Reed continued to do the heavy lifting in the run game, racking up 274 yards and 3 touchdowns on 26 carries, for an average of 10.5 yards per carry, including a big 70 yard run. Pieper was also a big contributor on the ground, running for 102 yards and one touchdown on 14 carries, including a big 50-yard run. Bryce Running Hawk added two carries for five yards, and also had one reception for 17 yards. Brodey Planansky had two receptions for 100 yards and two touchdowns.

As dominant as the Hawks’ offense was, their defense shined the most, completely shutting down the Indians throughout the game. Sophomore Cade Moore led the Hawks with 12 tackles, including four for a loss. Running Hawks had 11 tackles. Pieper had nine tackles, including 2 for a loss. Baiden Planansky had 8 tackles, Trent Reed 6, Brody Planansky 2, Austin Anderson 1, Johnny Toof 1.

More in this category: « Regulators overcome deficit to beat Sydney 12-8