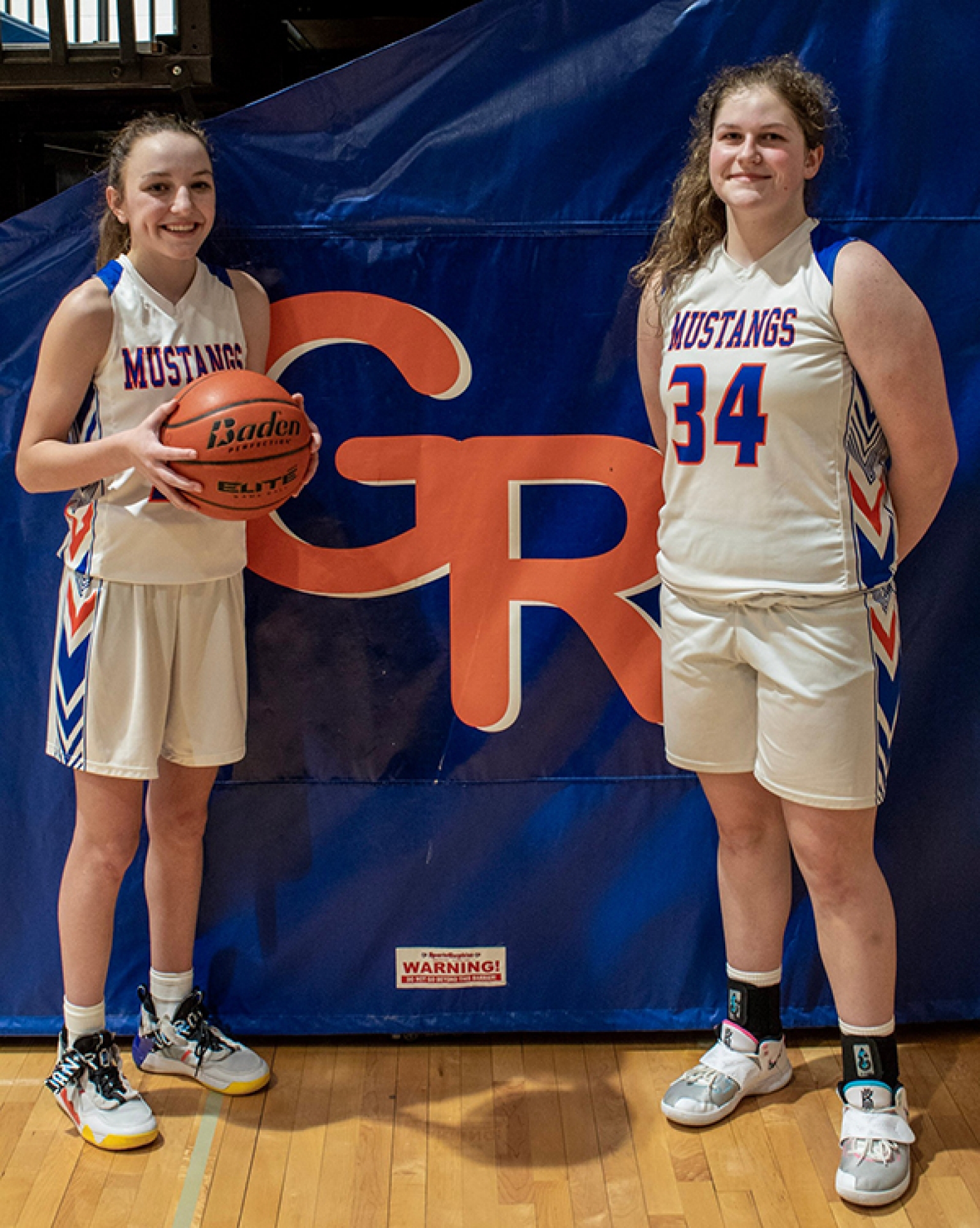 The Gordon-Rushville Mustang Girl’s basketball team is having an exceptional season, posting a 11-4 record through the third week in January.

A huge chunk of the production and success is coming from an unlikely source, a pair of freshmen, Haley Johnson and McKinley Grover.

The pair have wasted no time in getting their varsity careers jump started.  They have leapt into significant roles for Head Coach Randy Hurlburt’s squad.

“Both of them are very coachable, eager to learn and play, and they love the game,” said Hurlburt. “This all helps them become great players and team players.  They give us a lot of effort while on the court.”

One half of the freshman duo is the guard, Haley Johnson.  Johnson is averaging a solid 8.0 points per game and leads the team in assists with 35 in 14 games.  Johnson is amongst the leaders in steals and rebounds also.

Her coaches talk about her “game face” and how she never backs down from a challenge.  Coach Hurlburt gives her credit for her ability to see the floor and make the right decisions.

McKinley Grover, who plays her minutes in the paint as a center, has pulled down an impressive 64 rebounds this season.  Grover averages 3.8 points per game, sitting fourth on the team.

Grover is praised for her tenacity in the paint going after rebounds and on defense.  The offensive side is starting to come along with her improved footwork.

The duo combine for an 11.8 points per game, which is about 20 percent of the team’s scoring average.

“They are both still learning the game and our system, but have impacted this team in a positive way,” said Hurlburt. “Even though they are kind of shy socially, they are not shy on the court and get after it.  I think the upperclassmen are glad to have them and realize we need them to be successful.”

Coach Hurlburt can remember four players in his tenure that have contributed this much as freshmen.  They were Alicia Ostrander (2007), Kenna Campbell and Josie Perez (2013), and current Mustang Tessa Hurlburt (2019).

These two young ladies are no strangers to the hardwood, being  a part of the Gordon Youth Basketball Association (GYBA) program since the 3rd grade.  They have an undeniable chemistry, which has come from playing together for so long.

Angela Anderson coached them while they competed in the  GYBA.

“The freshman girls as a whole are a skilled and hard working group of young ladies,” said Anderson. “Haley and McKinley much like the others always worked hard and were determined to meet every expectation I set,” she added.

The bright lights of the varsity stage did not seem to bother the pair, as the transition has been fairly smooth.

The Lady Mustangs have their sights set on the remainder of their schedule which features marquee match-ups with Mullen, Chadron, Bridgeport, and Morrill.  In addition, the Western Trails Conference Tournament is coming up quickly.

No doubt Johnson and Grover will play a pivotal role for this team through the upcoming month.

“When two people are put together and have unique traits, then combine; it usually results in success or otherwise positive results for themselves and others around them,” said Anderson. “This couldn’t be truer. Lots of good things should be in store for the Lady Mustangs.”

More in this category: « Hay Springs Volleyball vs. Minatare 9-28-20